“At Doubling Gap, same county, (Cumberland) the brethren under the supervision of a Building Committee composed of Peter Baker, Leonard Weast and Henry Snyder, began in May, 1855, to collect “funds for the building of a meeting-house for the use of the church of God” at that place.”(1) The indenture for the church property is recorded as Deed No. 3167 in the Cumberland County records. According to this document, it was made “the twenty-fifth day of September, Anno Domini one thousand eight hundred and fifty-five,” from Henry Snyder (and Mary Jane, his wife) to Joseph Ross, Treasurer of the East Pennsylvania Eldership of the Church of God and his successors in office, for fifty dollars. (This parcel is now the cemetery.) The congregation was organized in 1853 and a bethel was constructed on the old Purdy Farm, east of the mill at McCrea. Services were held in the old log school house at Doubling Gap and barns or homes that were opened for them. Winfield Salisbury remembers of his mother telling of the old slab benches used for services. Peter Baker was his grandfather. Reverend John Winebrenner preached some sermons here. Grandmother Baker often told the story of her conversion in 1833. She said, “They were called Mackeys and I didn’t want to be called that, but when I got converted I didn’t care what they called me.”

“George Thomas and Anna Rebecca Whistler joined the church April 1906. The Sunday school was closed the fall of 1905 and reorganized in April 1906 with G. T. Whistler as Superintendent and teacher of the mixed Bible Class.

In the Spring of 1908 the congregation decided to repair the church which was in very bad condition. It had a crack in the wall that ran from the door to the northwest corner of the building. Some wanted a new building. So an inspection was called and the building was condemned. There were 14 members of the church at this time when the building of a new church was proposed and voted upon. Seven members decided to withdraw their help because “to build was impossible.” The other seven members decided to go ahead and build. Many people in the community who were not members helped with donations of money, hours of work and helping with ice cream festivals held in a wooded area across the big run behind the store at the junction of the Enola-Roxbury Road and the State Road 233, going west by the old blacksmith shop on the right. “The logs that support the floor were donated by Alfred Barrick and he helped Geo. Whistler with hauling, loading and unloading. The back wheel fell off the axle. Alf Barrick’s foot was caught between the axle and the ground. George picked up the axle with one hand and put the wheel on with the other. He said that the two of them had tried to put the wheel on and couldn’t but God made him strong so that he could lift the axle and put the wheel on and get Alf’s broken foot from under the axle.”(3) The Williams men, Bryan and his father Malon did the brick laying. They lived in Newville. They were black men. The bricks on the inner course are the ones from the old church. The walls are three courses thick. The cornerstone of the building was laid in the latter part of the summer of 1908 with the Reverend C. H. Heiges bringing the message, as he tells it, “Standing between the wheels of my buggy,” which he used to convey him from the parsonage in Newburg where he lived while serving the Newburg Circuit.

“MCCREA: The dedication of the new church has to be postponed two weeks longer on account of the paper hangers not being done. The time is set for July 4th.”(4)

“MCCREA: The new church is now ready for dedication, which will take place on Sunday, July 4. Rev. Dr. Forney, of Harrisburg, will preach the dedicatory sermon in the forenoon. Children’s meeting to begin at 2:30 p.m. The pastor urges all parents to bring their children at 3 p.m. The colored brethren are to take charge of the meeting. Evening services, preaching by Rev. Bowersox, of Newburg. C. E. Society will hold a short consecration meeting before preaching. Everybody is invited to attend these services.”(5)

“MCCREA: Next Sabboth morning the church of God will reorganize their Sabboth School at 9 a.m. Everybody is invited to come and help along. Christian Endeavor in the evening at the usual hour. Last Sabboth was a day long to be remembered by our community, when the new Church of God was dedicated, although not quite out of debt yet, as there is about $240 to be raised yet. The services were fine and largely attended, more than the house could hold, and many contributed toward the building. They now have a fine brick church with a beautiful interior and must be seen to be appreciated. Almost every home was made happy by friends coming from a distance for the occasion. D. P. Hoover had thirty for dinner. It was surely a joyful day and we hope they will prosper and that God will bless the church.”(6) 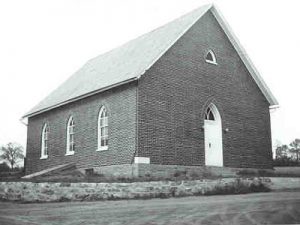 “Late improvements have been a parking lot on ground again donated by the McCrea family and a vestibule of brick was built in 1949.”(7) 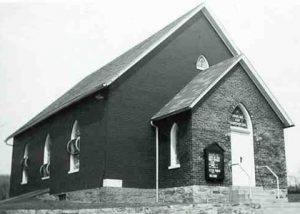 In 1962, construction was begun on an addition to the 1908 bethel, to meet growing needs of the Sunday school. This addition was completed and dedicated on Sunday, March 24, 1963. 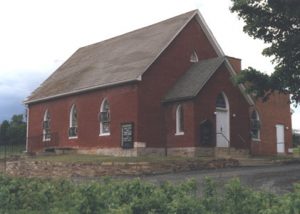 The area beneath the main sanctuary was excavated in 1976, also to provide additional space for Sunday school rooms.

Seventeen acres, northwest of the 1908 bethel, and one and one-half acres across the road from that bethel were purchased in January 1979 to provide room for additional expansion and future growth.

A building committee consisting of James Henneman, James Kyle, Ralph Mowery, and Pastor Neville H. V. West was appointed by the Administrative Council in January 1980 to explore the need for additional classroom facilities.

The building committee explored many avenues for expansion and presented them to the congregation in March 1980. A majority agreed to have the committee obtain plans for approval at a later meeting. The plan and bid of Conewago Contractors, Inc., Hanover, PA were accepted by the congregation for a Christian Education building after three plans and bids had been reviewed. Groundbreaking was held on April 5, 1981 and work began the following week. After numerous design and mechanical changes for the interior, construction was completed in December 1981. 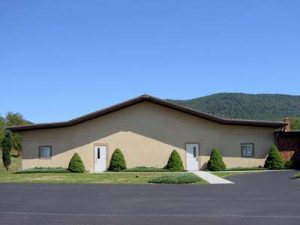 At the congregational meeting on October 19, 1988, there was discussion on erecting a new bethel. A committee, previously appointed to review the possibilities, had five meetings in the past year and met with three contractors to begin the formulation of plans.

Another congregational meeting was held on June 11, 1989 when plans were presented and discussed regarding finances. Of 54 eligible votes, 51 voted to proceed with building.

A groundbreaking service was held on September 24, 1989 and excavation began the next week. Member Harold Loy was appointed project supervisor and subcontractors were hired.

The new bethel was ready for occupancy on October 21, 1990. After a brief opening service in the old (1908) bethel, the congregation proceeded to the new building led by interim pastor Harry C. Cole who carried the 1880 pulpit Bible. Other participants were: Lester Moffitt and Edith Rickards, members for the most years, carried the veteran’s memorial plaque and the altar cross; Clarence Hoover, oldest military veteran, the U.S. flag; Deborah Ginter, Sunday School Superintendent, the Christian flag; Kevin Hurley and Eric Stum – flag stands; Edgar and Lois Stum – altar vases; and Brian Hosfelt – a floral arrangement in honor of his fifth birthday. Other members of the congregation carried hymnals and pew Bibles. 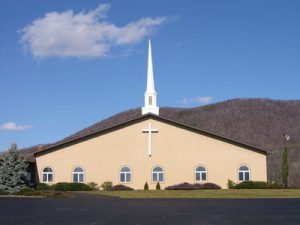 Nursery for infants through 2 years of age is provided for Sunday services.

Welcome to the Doubling Gap Church of God Website. We are glad you visited us today. We want you to know that you are loved by God and cared for by his people here at Doubling Gap.

We strive to be a church that stands in the "Gap" with the good news of God's love. We want to help people grow through 5 key areas, which form the vision of our ministry. Those areas are: Worship, Evangelism, Instruction, Prayer, and Fellowship.

We trust that you can find the information you need. If you have any questions, or if there is any way we can help you or your family, please contact us via E-Mail or call 717-776-6092. We look forward to hearing from you.

Something Deep and Binding

Amina, an Iraqi immigrant, and Joseph, an American from birth, attended a political protest on opposite sides. We’ve been taught to believe that those who are separated by ethnicity and politics carry unbridled animosity toward each other. However, when a small mob accosted Joseph, trying to set his shirt on fire, Amina rushed to his defense. “I don’t think we could be any further apart as people,” Joseph told a reporter, “and yet, it was just kinda like this common ‘that’s not OK’ moment.” Something deeper than politics knit Amina and Joseph together. Though we often have genuine disagreements with one another—substantial differences we often can’t ignore—there are far deeper realities that bind us together. We’re all created by God and bound together in one beloved human family. God has created each of us—regardless of gender, social class, ethnic identity or political persuasion—“in his own image” (Genesis 1:26). Whatever else might be true, God is reflected in both you and me. Further, He’s given us a shared purpose to “fill” and “rule” God’s world with wisdom and care (v. 28). Whenever we forget how we’re bound together in God, we do damage to ourselves and others. But whenever we come… [Read More]